Built for Speed & Born to Run.

Jackrabbit began in 1981, with our founder Earl Anderson’s observation to create a product that would not only save grower‘s time and money but would change the evolution of the nut harvesting systems as a whole. He took the time to interview multiple growers, asking them what they felt the industry was missing or lacking. He took the feedback he received and designed the first Jackrabbit bank out system. Over the years, new improvements have been made to the system and it has evolved into Jackrabbit’s industry leading design.

Jackrabbit not only operates in California, but in Arizona, New Mexico, and Georgia, as well as internationally (South America, Australia, and Spain/ Portugal). 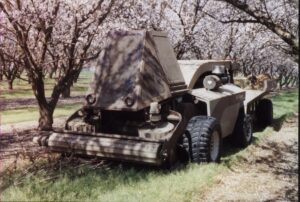